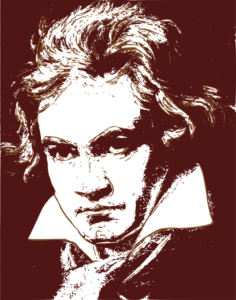 Ludwig van Beethoven: the iconic composer. Not only is Beethoven famous for his voluminous music compositions, but he is also well known for his descent into deafness. It amazes one and all to learn that he composed his Ninth Symphony when almost completely deaf. Looking at his life, one can see symptoms that people with hearing loss today share, as well as how even a composer can triumph over it.

Symptoms and Causes of Deafness

Beethoven began reporting symptoms of hearing loss when he was only 25, though it may be likely that his hearing loss began even before then. No one is sure of what caused his hearing loss, though several explanations exist. It may have been due to lead poisoning, a distended inner ear, or even dunking his head in cold water to keep himself awake. Nevertheless, Beethoven reported severe tinnitus and loudness recruitment. With tinnitus, he constantly heard a loud roaring in his inner ear. With loudness recruitment, sounds rang far louder than they actually were in Beethoven’s ears. Near the end of his life, in his mid-50s, the composer had gone almost if not entirely deaf.

The constant nagging of his hearing loss caused Beethoven to undergo mental and social reactions that people with hearing loss may also experience at some level. He became annoyed with how difficult it was to communicate verbally with others and isolated himself. Beethoven also wrote of his increasing despair and thoughts of suicide. When he thought the matter through, though, he concluded he had much art to share with the world still.

Besides his resolution to live as an artist, Beethoven had other methods of coping with hearing loss. For composing, he had an amplifier built for his Broadwood piano, helping him feel the music through vibrations sent into the floor and his core. To talk with people, he had hundreds of “conversation books,” in which friends wrote to him what they wanted to say, and he responded either through speech or writing.

Triumph in the End

By the end of his life, Beethoven had composed and conducted some of the world’s most recognizable pieces in classical music. It may even be that he became the father of the Romantic era in music while his hearing loss became its most severe. Although his deafness caused him much suffering, it also may have helped to produce some of his greatest works.

Need help with your hearing? Clarity Hearing can help. Clarity Audiology & Hearing Solutions is an independently owned and operated clinic that focuses on quality of care and personalized, friendly service to the surrounding areas of Ellicott City, Catonsville, Columbia. Our Doctors of Audiology are highly trained with advanced degrees and take the time to provide the personalized care and attention that you need and deserve. We provide advanced hearing aid options that personally calibrated with cutting-edge digital technology to fit your hearing loss, your unique ear anatomy, and your individual listening needs.

Categories: Hearing Loss | Tags: Beethoven, deafness, and hearing loss
This entry was posted on Friday, December 20th, 2019 at 11:03 am. Both comments and pings are currently closed.
Notice of Privacy Practices
Service Areas